When I started collecting some facts for this year’s retrospective, I couldn’t believe how many fanstastic, game-changing and also humbling things have happened in just a single year.

If Travis CI has been a toddler when Josh and I started touring conferences in 2011 to tell everyone about the idea and vision then in 2012 it was a kid growing up, going through some heavy duty rock’n’roll and all night party times.

In 2011 the initial experiments formed into a vision: We wanted Travis CI to be for tests and builds what RubyGems is for distribution. But not just for Ruby, for any language. We wanted to target Open Source code first. And we wanted dead-easy and public continuous integration to become a standard for Open Source.

Over time we got more and more serious, also because we got such great and encouraging feedback. Since we were quite limited on resources, we’ve had to adhere to a “build the simplest thing possible” rule pretty strictly. The result was a rather simple app that showed an exciting vision, but also already proved useful enough for people to rely on on a daily basis.

Then in 2012 Travis CI saw rapid growth. It became obvious that we’d need a much better foundation, so we could scale things out with the exploding demand. We’ve collected some money from the crowdfunding campaign. This allowed us to grow our team and implement the things we’ve promised to build.

If you’re really interested you can play around and add/remove team members, repositories or change the scale. I’ve built this little app to get a good overview for this retrospective.

You can see nicely how the crowdfunding campaign (orange) took quite a few resources in the first weeks of the year, but then zeroed out. Instead we started working on Travis CI Pro (blue) which took a huge part, and still does. In addition, somewhere around June we started working on the new Ember.js web client as well as the new API (yellow, see below) and split up the app more and more (red) towards the end of the year.

And if you really want to stalk us more then you can find even more detailed information in a feature list and a summary of our commit history.

Conceiving, planning, designing, realizing and launching the crowdfunding campaign including the Stripe payment integration, founding a company (so we could legally accept money), production of ringtones and a few rounds of private feedback from fellow developers took about two months in total, one developer mostly.

We were already amazed by the fantastic amount of support and great feedback that we were getting while we were putting the campaign together. But when the site went live in February and raised a remarkable amount of money in no time, we were just blown away and plain humbled.

If you have a spare minute then please take the time to review our fantastic sponsors and the amazing list of private donors.

The overall revenue of the crowdfunding campaign to date amounted to roughly 125,000 USD. Without this money Travis CI would not be what it is today.

There’s so much to say about the crowdfunding campaign that doesn’t fit into this post. We’ll write it up. Expect a more detailled summary early next year.

In the course of 2012 the team behind Travis CI has more than doubled.

If you go to Berlin and ask around who people would really like to work with - who do you think would be on the list? I’m obviously biased, but I’m sure Konstantin and Mathias would rank very high within the Ruby community.

To say the very least, we were super happy that with Konstantin and Mathias two of the best Ruby developers we know joined the team in January full time. It took us a while to change the company contract and fully get them on board, but finally in April we were all set. They’ve changed the face of Travis CI entirely. Having these guys join the team was the best thing that could happen to the project. 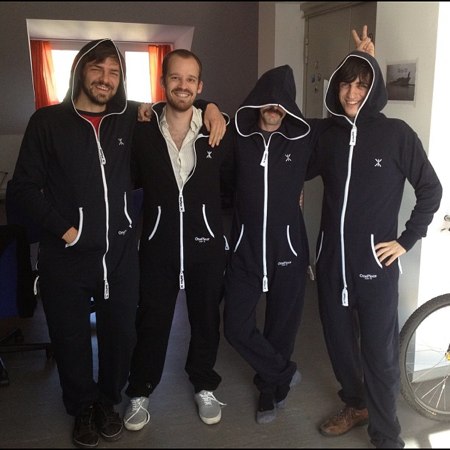 In October Engine Yard started sponsoring a fulltime position for Piotr in the most broadminded way, as part of their Open Source Grant program. Piotr is a fantastic Ruby developer. He has been active as a Rails core member and worked on distributed applications, as well as Ember.js based clients in the past, so he was the perfect addition to our team. We are super happy to have him on board, and super thankful for Engine Yard’s sponsorship!

Michael, one of the first members on the team, luckily was able to continue to maintain our VM cookbooks, one of the most important and mature components of the system, in the most dilligent and trusty way.

We’d also like to mention Sarah, who’s done some tremendous work on community support, tickets and a lot of bug fixing over the last months. She’s also built the Mac OS X toolbar “watcher” app for Travis CI as well as Travis Lite, an alternative, light-weight web client for the Travis API.

We believe this is huge.

Next to that, the most exciting and popular new feature on Travis CI is the pull request support and later the tight integration with GitHub’s UI, that has been added. Konstantin has done an amazing job at this, also adding a new layered GitHub API client that now makes our life much easier at Travis CI.

Then later this year, Piotr added two more features that gave tremendous value to Travis CI, as they open up an entire new space of usecases and possibilities: secure env vars (so users are now able to add sensitive data to their public .travis.yml config files) and (building on that) build artefacts.

If something is broken and then gets fixed we tend to entirely forget about that unfortunate previous situation because we’re so happy with the new one. However, we still remember how many issues we had with both the old API and the old JS browser client.

We’ve started working on a new Travis CI web client in early June and a new Sinatra based API app shortly after that. Since we also had to tackle so many other things in parallel, the whole thing wasn’t ready to launch into beta until October.

But we were super happy with the result, as it’s all much faster, much easier to maintain and add features to it. We’ve since ported the client to Travis CI pro and fixed a good number of edge cases around the new JS based OAuth sign-in process.

Travis Hub and the army of apps

One year ago Travis CI consisted of a web app, a bunch of worker machines and a central message crunching app called Hub. Today there’s an entire small army of apps that all share their their part in getting your builds run:

There are also other apps for serving the static web client and serving the HTTP API. Moreover, we created other tools for things like administration, single sign on, worker maintenance and so on …

Breaking up Travis CI into lots of tiny apps that communicate via AMQP, Sidekiq and HTTP made it much easier to scale things out, spot issues related to a certain aspect but also work in parallel without accidentally stepping on each other’s work.

Even with the rather simple setup we had a year ago, when things went wrong it often turned out to be quite hard to tell what’s actually going on in the system. That situation would not get any better once we’d split things up into separate components even more.

Being the devops hero he is Mathias immediately jumped at tackling that situation. He changed and cleaned up the way our apps write log output, centralized them in Papertrail, added metrics everywhere, piped them through the logs to Librato so we’d get some pretty graphs and assembled them on a nice dashboard.

Over the next months the situation improved step by step and we’re now able to tell what’s happening and isolate issues rather quickly even though our app now consists of many more components.

And finally, we’ve worked a lot on turning this platform into a paid service so we could eventually allow everyone who had been asking for this to give us their money … so we could continue providing this service for Open Source for free and also make it even better, more useful and exciting.

Obviously we can’t talk much about the exactly way this was realized, but we are able to re-use quite a bit of the code that is also powering the OSS version of the platform. The two services are entirely separated and share no resources other than code though.

Figuring out all these bits and pieces took quite a bit of work. Mathias has been working (next to lots of other things, but still) 2.5 months on integrating payments, coupons, billing etc. alone. A bunch of things need to work in a slightly different way for the private service, so lots of adjustments had to be made.

We’re still in a closed, private beta and we have a number of big improvements in the pipeline before we’ll be able to entirely open the service. But we can say proudly that our users are already pretty happy with it, given the feedback we have.

What’s up for next year

In 2013 we will mostly continue the path that we’ve taken in 2012 and improve the existing service. Reliability, flexibility and robustness are on the top of our list. Further improvements to usability and performance, adding missing features and further build the community around Travis CI are other goals on that list.

But we also want to look into fields that we haven’t quite touched much, yet, like simplifying support for continuous deployment and other automation steps or adding an API for third party apps. We have some great ideas in this space, so be excited :)

Obviously our main priority has to be put on shipping Travis CI pro, so we’ll be able to pay our bills and continue to support Travis CI as an open and free service for the Open Source community. But in order to have some more free resources for this we will also look into follwing up on the crowdfunding campaign for the next year. Expect to hear more about this soon.

So, if 2011 was the year of birth of the Travis CI project and 2012 was the year of its childhood and youth, we hope that we can make 2013 the year of growing Travis CI up to stabilize as the most useful, efficient and well supported continuous integration platform out there.

We are super excited and looking forward to working with you and we are extremely thankful to be able to be part of an amazing project and a fantastic community like this.

Thank you all for a fantastic year!